In a Male-Dominated World, Here's How to Survive as a Women-Owned Business

Being a woman in a male-dominated world isn’t easy. There are the daily struggles, like cat-calling, man-spreading, and mansplaining. And then there are more systematic struggles, like being passed over for promotions and jobs. The odds are not always in women’s favor but don’t take it personally. It is [currently] a Male-Dominated World. But this doesn’t mean that women should settle for less than what they deserve. It just means that women have to fight harder to survive.

In 2021, 1,821 new women-owned businesses were started every day. However, women-owned businesses only make up about 42% of the small businesses in America. There’s still a ways to go before gender equality is everywhere in our society. Until then, we survive day to day fighting injustice whenever we can. Surviving is a form of fighting.

So, when the odds are stacked against you, what can you do? Here are 6 tips on how to survive as a women-owned business in a male-dominated world.

It has been proven time and time again that one of the most powerful tools is a strong network. Men have been climbing ladders through social connections big and small since forever. Women deserve to do the same. Social media is ubiquitous in the modern era, and women’s social media usage has a slight edge over men’s. Women-owned businesses should embrace and use as many social media networks as possible. LinkedIn, Twitter, Instagram, Facebook–if your business doesn’t have one of each, does it even really exist?

One of the biggest mistakes a woman in business can make is trying to be something she’s not. Women of the past have encouraged other women to blend in. But, in the modern era, more success will come when you embrace femininity and use it to your advantage. Women-owned businesses should use what comes most naturally to them; authenticity will serve them well. Women drive 70-80% of consumer purchasing decisions. So, it would, naturally, serve a women-owned business to play into feminine consumer power.

3. Be confident in what you know

Gender bias often means that women are overlooked when it comes to expertise. Men will assume that women in the room know less than they do, though this is pretty rarely the case. It is necessary that women don’t lose faith in themselves and make their voice heard when they know best.

4. Don’t be afraid to drop names or cite experience

By the same token as the previous point, women-owned businesses must make their voice heard. Never be afraid to “brag” or “name drop.” If it’s the truth, it should be heard. Men in this male-dominated world are so rarely afraid of bragging, but when women do it it’s “unseemly.” That’s nonsense. If you have rare experience to bring to the table, those around you should know about it. Surviving as a woman in a male-dominated world means using every weapon at your disposal.

4. It takes a village

It’s been said in these blogs before, but women must stop feeling like they have to do everything themselves. Women are social creatures, this is backed by science, and there’s nothing wrong with it. Having a team is necessary for most ventures to launch, succeed, and survive. A women-owned business has everything to gain by backing itself with a large and strong team.

In a male-dominated world, it is so easy to feel bogged down. But, surviving requires consistent effort. Don’t let the little things get to you, and keep punching. Women-owned businesses are the future and the only way to get there is with continued fighting. The work continues! 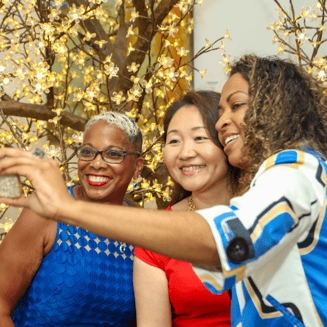 One women-owned business you can support today is Luminary by becoming a member and joining a community you were always looking for!

A first-of-its-kind, Luminary is a membership-based global professional growth platform and collaboration hub created for women and male allies to address the systemic challenges impacting women across all industries and sectors. The ultimate career advocate, Luminary provides “real world” advice, tools, and resources to advance, build, connect, and develop through programming and networking opportunities.

With no application process, Luminary is committed to diversity, equity, and inclusion. We invite you to come sit at our table because we are all in this together!